Photoblog of Uncommon Pictures of Rizal 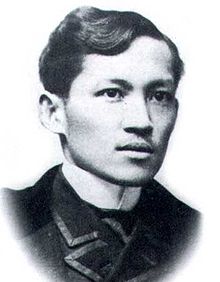 Many of us are used to seeing the above picture of Rizal's face when we search for him in the internet. Here are is a small collection of pictures of Rizal which are not commonly or easily found online.
The above picture shows Jose Protacio Rizal Mercado y Alonzo Realonda when he was still a student at the University of Santo Tomas, taking up medicine (specialising in opthalmology). The date on the picture is 1879, meaning he would be around 18 years old at the time the photo was taken.
Rizal often agreed to pose for the paintings of his friend, Juan Luna.  The picture above showed him posing as an Egyptian scribe in Luna's award winning painting "The Death of Cleaopatra" (1881).  The painting won the silver medal in the 1881 National Exposition of Fine Arts in Madrid.


The photo below shows the circle of friends relaxing in Luna's Parisian studio.
To pass time, the friends also practiced fencing. The following photos show Jose Rizal fencing with Juan Luna in Paris.

Rizal, being an educated Filipino, was considered an "Ilustrado" during the spanish colonial period. The photo below shows three of the most prominent Ilustrados during the late 19th century.
It was Mariano Ponce (right) who gave the name Mi Ultimo Adios to Rizal's untitled last poem which he wrote just before his execution.

The picture below shows Jose Rizal eating with other Filipinos who attended the Paris Expo in 1889.


The photo below was taken in the same year in Paris at the Tavera Residence. Long before smiling photos were a fashion, Rizal seems to show a hint of a smile in this shot.
Finally, here is a photo of Rizal's calling card when he worked as an opthalmologist during his self imposed exile in Hong Kong in December 1891 to June 1892. 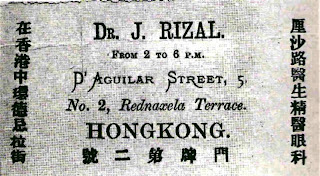 His clinic was open from 2pm to 6pm everyday.
Posted by Ladies for Rizal Bonn Chapter at Thursday, August 11, 2011