After a turbulent year, the Ladies for Rizal and Knights of Rizal Bonn Chapter celebrated a Christmas party that heralded the strength of the organisation and the enduring commitment of its members to solidarity and teamwork. The party held last 02 December 2011 also highlighted the success of the LFR and KOR in overcoming the obstacles it encountered in the beginning of the year.
Noteworthy events were the group's success in the Bonner Internationales Begegnungsfest and its annual Yugyugan Disco Party. Both were fundraising events aimed to support the group's charitable activities in the Philippines. 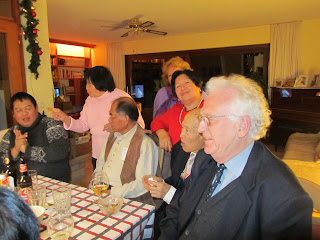 Food was overflowing as usual, but what made the party more enjoyable were the impromptu Christmas Carols singing by the group, led by Sir Amor Buccat and Lady Josie Holzapfel. This really brought a holiday the atmosphere to the event. 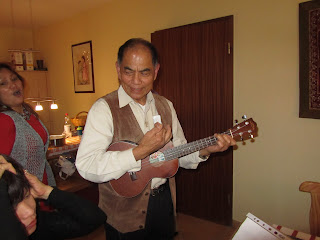 Shortly before the party, the organization received word from Kababaihang Rizalista inc Headquarters in Manila thats its annual report were well received by President Lady Bernie Lizardo. Lady Bernie praised the organization for the well-written and honest report and again congratulated the group for its successful year.
Merry Christmas to everyone from the Ladies and Knights of Rizal Bonn Chapter!
Posted by Ladies for Rizal Bonn Chapter at Tuesday, December 13, 2011